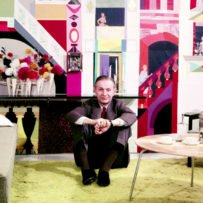 One of the biggest names in mid-century textile design is Herman Miller’s Alexander Girard (1907-1993), trained at the Royal Institute of British Architects in London and at the Royal School of Architecture in Rome. Girard, born in New York City, was raised in Italy but returned to the United States to live and work, forming offices in New York, Michigan and New Mexico. Girard contributed to this period of design by creating textiles that would go along with the starkly innovative furniture beginning to determine the landscape of modern life. These pieces combined metal and colored plastics to create a new aesthetic that called for new showroom and household dressings. Girard managed to inject an uninhibited use of color and a clever playfulness into the industry. He turned to countries like Mexico and India where a handicraft, or folk art, tradition still thrived, their processes, motifs and colors not yet threatened by an industrial culture. These pieces inspired Girard to develop a new method of coloring andpatterning that proved to be a vibrant counterpoint to American modernist furniture.

1932 saw the opening of Girard’s first architecture and interior design office in New York City; by 1937 he had moved to Detroit and set up shop there. In 1949, he put together the “For Modern Living” show at the Detroit Institute of Arts, displaying an array of objects from dog leashes and sunglasses to glassware, silver and furniture. Of the exhibit Girard wrote, “Here is a representative selection of articles gathered from all over the world… they all share a common, unconscious pride in developing new values rather than depending only on the thought and effort of the past.”

In 1956 Girard designed the remarkable interior for La Fonda del Sol restaurant in New York City’s Time Life Building. The work, featuring a prominent sun motif and an adobe bar, won a silver medal in 1962 from the Architectural League of New York. In 1965 he redesigned every aesthetic aspect of Braniff Airlines, down to the stationary and sugar packets. In association with this project he developed a small line of furniture, simpleshell structures offered with a variety of upholsteries, sold for a short time through Herman Miller.

Charles Eames, with whom he produced the film “Day of the Dead” in Mexico in 1956, brought Girard to Herman Miller. Girard created a number of textile patterns for the company; each made at a high level of industrial quality and durability. His sense of style was shocking and exciting for the time. Recognizing that for most palates “a brilliant pink or magenta carried a connotation of double-barreled horror,” Girard continued to introduce these shades triumphantly into his designs. In 1959 he helped give a former music hall and brothel a facelift as their new San Francisco showroom. One of his biggest ventures with Herman Miller was the innovative yet financially unsuccessful Textiles & Objects store in New York City, opened in 1961. The store sold objects that he brought back in bulk from his travels around the world, as well as products made with his textiles such as pillows and tablecloths, and small furniture by other Herman Miller designers. The short lived store, seen by many as an exhibit rather than an enterprise, provided the experience Girard described as “seeing, touching, and remembering familiar associations and all the other intangible activities of the mind and soul.”