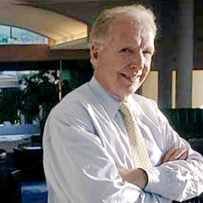 Global architect Arthur Charles Erickson (1924-2009) was a passionate advocate of cultural awareness, and a fervent explorer of human and natural environments. His buildings, though remarkably diverse, share deep respect for the context, incomparable freshness and grace, and the dramatic use of space and light. He has brought to his work an understanding of the community of man that, when filtered through his insightful mind and fertile imagination, gives birth to a singular architecture that is in dialogue with the world.

A Vancouver, BC native, Erickson studied at the University of British Columbia and later at McGill University in Montreal, Quebec. Advanced studies brought Erickson to Greece, Italy, the Middle East and Japan, where he discovered the nuances of architectural style in climate and terrain. In 1963, Erickson reached a landmark moment in his career when he won a competition to design Simon Fraser University in Burnaby, BC. Upon the University’s completion, Erickson’s integrative design gained international acclaim, opening the gateway to a long and distinguished career. In 1972, Erickson founded his own firm in Vancouver.

As both architect and professor, Erickson has contributed much to the architectural community. His works include The Museum of Anthropology at the University of British Columbia, the Provincial Law Courts in Vancouver, the San Diego Convention Center, Napp Laboratories in Cambridge, England, the Canadian Embassy in Washington, D.C., California Plaza in Los Angeles, and most recently the Museum of Glass in Tacoma, Washington. Erickson’s noteworthy contributions and innovative design work earned him the Gold Medal from the American Institute of Architects in 1986. The highest honor bestowed by the AIA, Erickson was the first Canadian to receive the reward. Prefacing this honor, Erickson received numerous awards and degrees, including gold medals from the Royal Architectural Institute of Canada in 1984 and the French AcadEmie d’Architecture in 1986.