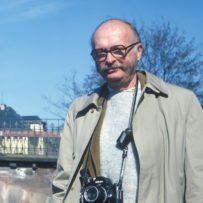 Charles Willard Moore (1925 – 1993), architect and educator, was born in Benton Harbor, MI. After graduating from high school, Moore enrolled in the architecture program at the University of Michigan and earned a bachelor’s degree in 1947. By the 1940s Michigan had begun to move away from the historicism of the Beaux-Arts, and Moore received instruction in a more technical approach to design focusing on construction technology and specification. Upon graduation, he moved to San Francisco, absorbing the contemporary Bay Region architecture and obtaining his California architecture license. After traveling to Europe and Egypt on a fellowship in 1949-1950, Moore landed a position teaching architecture at the University of Utah. After two years at Utah he was drafted into the Army as a 2nd Lieutenant in an engineering unit and served in Korea until 1954. Upon his discharge, Moore began his graduate studies in architecture at Princeton University.

At Princeton, Moore learned about architecture from some of the leading architectural theorists of the time, including the École des Beaux-Arts-trained Jean Labatut, the Milanese architect Enrico Peressutti, and the influential American designer Louis I. Kahn. Moore would often take his own students to Kahn’s Philadelphia office to discuss current architectural theory and work with Kahn directly. He also came into contact with a fellow student, Robert Venturi, who would in a few years gain fame as a significant theorist with his book Complexity and Contradiction in Architecture (1966). In 1956, Moore earned his MFA, and the next year he completed the first Ph.D. in architecture granted at Princeton. His dissertation, which explored the relationship of water and the built environment, was later published as Water and Architecture in 1994. After two years teaching at Princeton, Moore accepted an invitation to teach at the University of California, Berkeley. That same year the architect William Wurster became dean of the newly created College of Environmental Design, and in 1962 Moore was promoted chair of the Berkeley architectural program.

That same year Moore created the first of several architectural partnerships to which he lent his name and skills over the next thirty years. With two fellow Princeton students, Donlyn Lyndon and William Turnbull, Jr., and a recent Berkeley graduate, Richard Whitaker, Moore established the eponymous Moore/Lyndon/Turnbull/Whitaker (MLTW) firm. Around this time, Moore began designing homes in the Bay Area near Berkeley that reflected his thinking about architecture in the postmodern era. Moore’s own house in Orinda in 1962, though tiny and inexpensive, revealed his original take on contemporary house design while demonstrating his interest in the phenomenological experience of spaces, an insistence on regionalism and the use of vernacular forms, and a conviction that dwelling was essentially an act of creating a world for the individual or individuals who would inhabit the space. Moore’s house replaced the modernist tendency of a flat roof with one that was pyramidal. He used columns to support the roof and flanked them with walls made of sliding barn doors that opened at the corners. His bed, bathtub, living room, and kitchen were all clustered in the same space surrounded above and around by dual aediculae. For Moore and his colleagues a place had to be sensible and legible to its occupants, but it also needed to resonate deeply with their conceptions of themselves and the world in which they lived. This view of architectural design would stay with Moore throughout his career.

During the eight years that MLTW existed the firm produced some of the most exciting architectural work of the decade. Its best known effort was the Sea Ranch residential resort (1964-1965) north of San Francisco. The ten buildings, designed to appear as if they grew like a natural outcrop from the dramatic cliff sides of the Pacific coast, garnered broad acclaim for their pitched-roof, red-wood-clad structures, which reflected the architects’ respect for ecologically responsible design. MLTW also produced other significant buildings including Kresge College of the University of California at Santa Cruz and the Faculty Club of UC Santa Barbara.

In 1965 Moore moved back east to become chair of the architectural department at Yale University, a position he held until 1971. He remained a member of the departmental faculty until 1975. While in New Haven he created a new partnership in Essex, CT, with William Grover and Robert Harper. As part of this new firm Moore helped design an addition to the Williams College Museum of Art and to the Hood Museum of Art at Dartmouth College. In each instance Moore sought to respond to each building’s setting and cultural context. In 1975 Moore returned to California and joined the architectural faculty at UCLA, where he continued teaching and writing. He also formed yet another architectural firm, Moore Ruble Yudell. One of tjheir most significant designs was the work they did for Tegel Harbor in Berlin, Germany.

Moore also became actively involved in UCLA’s Urban Innovations Group (UIG), which was led by the architectural department there. Out of this collaboration Moore created one of his more famous projects, the Piazza d’Italia in New Orleans, Louisiana. Consisting of an urban square dedicated to that city’s Italian community, Moore laid out a map of Italy in marble on the ground and then framed it with a backdrop of curved walls and abstracted colonnades and arches made from metal panels, stucco, and neon lights. This stunning structure reflected Moore’s playful approach to serious architecture.

After nearly a decade in California Moore was offered the O’Neil Ford Chair in Architecture at the University of Texas at Austin in 1984, and he spent his final years teaching there. In Austin he created his last architectural group with Arthur Andersson called Moore/Andersson. Among the designs that came from this partnership was the Wonderwall that became part of the 1984 Louisiana World Exposition in New Orleans. In 1991 Moore received the gold medal from the AIA, the professional organization’s highest honor. After a lifetime of hard work, hearty eating, and little exercise, Moore collapsed in Austin from a heart attack as he was preparing for another excursion across the country in search of architectural sites he had yet to experience.

Charles Moore devoted his life to creating structures that would mean something to the people who lived within them. In Body, Memory, and Architecture (1977) he explained that the architect should be devoted to the “task of understanding the potential of a place and the possibility of dwelling in it, of experiencing it with all the senses, of feeling it and remembering it and making it the center of a whole world.”  As a teacher and as a practicing architect, Moore lived by this credo every day of his professional life.