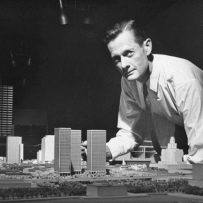 Ed Bacon (1910 – 2005) was a bizarro Robert Moses: a mid-century urban master builder who favored pedestrians over automobiles. Yet while Bacon held values similar to Jane Jacobs—and, like Jacobs, promoted his views through articles and books—the two were far from allies. Jacobs criticized the City Beautiful movement and its influence on Philadelphia’s Benjamin Franklin Parkway, which Bacon admired. He in turn viewed Jacobs, who celebrated the tumult of city living and opposed grand master plans to impose order on chaos, as a stubborn naysayer carping from the peanut gallery.  Jacobs did, in fact, once literally fire hostile questions from the audience at Bacon when he was speaking on a panel.

Ed Bacon: Planning, Politics and the Building of Modern Philadelphia, a new biography by Gregory L. Heller, presents Bacon as the third pole in the mid-century struggle between Jacobs and Moses for the soul of the American city. Heller, who helped Bacon write his memoirs, has written an entirely sympathetic—and informative, if somewhat plodding—biography that zooms in close on its subject, diving deep into the details of Bacon’s interactions with real-estate developers, politicians, architects (such as his friend Louis Kahn), and other urban planners.
Heller’s biography could just as easily serve as an urban history of modern Philadelphia. Bacon trained as an architect at Cornell University and then at Cranbrook Academy of Art under Eliel Saarinen, father of Eero, with whom Bacon also later worked. After a brief tenure working on planning in Flint, MI, Bacon returned to his native Philadelphia. He helped found the City Planning Commission in the 1940s and served as its director from 1949 to 1970.

His tenure there suggests that Bacon was born in the wrong era. He opposed the suburban sprawl that he participated in building.  In Philadelphia, Bacon planned and promoted highways and I.M. Pei-designed super-block high-rises because that is simply what one did at the time. He did want to protect pedestrians, but conceived of doing so in a comically futurist 1950s way: by removing sidewalks from the roadway and replacing them with garden paths behind buildings. Had Bacon presided over the Philadelphia of Mayor Ed Rendell or any of his successors, he would have simply been another conventional urbanist, championing pedestrians merely by buffering their sidewalks from cars with bike lanes and trees.

We tend to think of the 1950s as the heyday of American cities, and maybe even the sunset of America’s best cities. That’s a narrow view: Even before white flight, riots, and crime hollowed out the nation’s urban cores, the beginnings of mass migration to the suburbs and de-industrialization had already started. It began with the end of World War II, really; Bacon’s entire career was devoted to managing decline, as suburban malls replaced downtown shopping streets. Often, as in the previously undeveloped tracts of far Northeast Philadelphia, where much new housing went up during Bacon’s tenure, his best ideas were boxed in by the prevailing ethos of the time. Bacon wanted row houses with garages in alleys in the back, but the community demanded, and got, garages in front. Bacon wanted transit-oriented development, before the term even existed. For Northeast Philly, the transit never came.