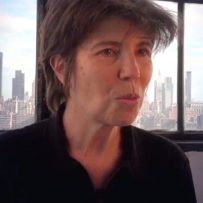 Elizabeth Diller is a founding principal of Diller Scofidio + Renfro, a 115-person interdisciplinary design studio that integrates architecture, the visual arts and the performing arts. DS+R’s international body of work includes: Lincoln Center for the Performing Arts in New York, including the redesign of Alice Tully Hall, the renovation and expansion of The Juilliard School, the expansion of the School of American Ballet, Public Spaces Project, and the Hypar Pavilion Lawn and Restaurant; the High Line, an urban park situated on an obsolete elevated railway stretching 1.5 miles long through the Chelsea area of New York City; the Institute of Contemporary Art on Boston’s waterfront; the Creative Arts Center at Brown University; and Blur, built on Lake Neuchâtel for the 2002 Swiss Expo.

Projects currently in construction include The Broad museum in downtown Los Angeles, the Museum of Image and Sound in Rio de Janeiro, the Medical and Graduate Education Building at Columbia University, the McMurtry Building for Art and Art History at Stanford University, the Berkeley Art Museum and Pacific Film Archive, and the Dongguan Factory and Housing Complex in Dongguan, China. Projects in design include: the United States Olympic Museum in Colorado Springs; the expansion to the Museum of Modern Art in New York; Zaryadye Park, adjacent to the Kremlin, Moscow; the Columbia University Business School in New York; the Rice University Opera Theater in Houston; and CultureSHED and 15HY, a cultural start-up and residential tower, respectively, located in the Hudson Yards Development in New York. Installation projects recently completed include: “Musings on a Glass Box” for the Fondation Cartier in Paris; “The Look” for the DESTE Foundation’s exhibition “DESTE FASHION COLLECTION: 1-8” at the Benaki Museum; the “Charles James: Beyond Fashion” exhibition at the Metropolitan Museum of Art; and the “How Wine Became Modern” for SFMoMA.

Ms. Diller is the recipient of a MacArthur Foundation “Genius” Award, the first awarded in the discipline of architecture. In recent years, she was named among Time Magazine’s 100 Most Influential People in the World and recognized by the Smithsonian Institution with the National Design Award, by the American Academy of the Arts and Letters with the Brunner Prize, and by the National Academy of Design with a Lifetime Achievement Award.

Ms. Diller is a recent recipient of an Honorary Doctorate of Humanities from Occidental College and is a Fellow of the American Academy of Arts and Sciences and the American Academy of Arts and Letters, as well as an International Fellow of the Royal Institute of British Architects. In 2003, the Whitney Museum of American Art held a retrospective of the studio’s work, recognizing DS+R’s unorthodox practice.