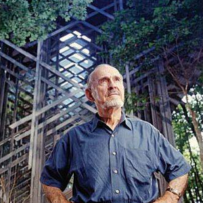 Though E. Fay Jones (1921 – 2004) was not quite a household name, most American architects and followers of Frank Lloyd Wright gave his residences and chapels outstanding praise for their beauty. Jones was one of the most highly regarded devotees of Wright, and designed a number of structures that both adhered to the master’s concepts and took them to a new level of grace and simplicity.

Jones was often dubbed the “Frank Lloyd Wright” of the Ozark Mountains region, because he spent nearly all of his career in Arkansas. Born in Pine Bluff… he constructed elaborate treehouses out of scavenged materials, including one that boasted an actual working brick fireplace—which unfortunately could not contain a spark that burned the structure down.

Jones’ passion for the architecture of Frank Lloyd Wright began at the age of 17 when he saw a short documentary film at the local cinema on Wright’s masterful Johnson Wax headquarters in Racine, WI. “You gotta put yourself back to southern Arkansas in the heart of the Depression,” Jones recalled in an interview… in 1991. “Here was this building that looked so futuristic, with Pyrex tubing, curving walls, light-suffused but windowless spaces, a forest of columns, and shimmering light coming through the whole thing. It reminded me of things in the comic strips. Flash Gordon and Buck Rogers.”

Jones entered the University of Arkansas in 1939 as an engineering student, but his studies were interrupted by World War II, when he served in the U.S. Navy in the Pacific theater. He earned his architecture degree in 1950, and went on to take a master’s in the subject from Rice University in Texas. For a time, he taught at the University of Oklahoma, and finally met Wright, still an idol to him and countless other young American architects, by chance in a Houston hotel hallway when Wright was in town for a professional honors dinner. A friendship developed, and Jones later remarked that he and Wright were exactly the same height and of Welsh heritage as well; in fact, it was Wright who told him that “Euine” was an archaic Welsh form of the name “John.”

In 1953, Jones won a fellowship at Taliesin West, Wright’s school in Arizona, and would spend several other stints under Wright’s tutelage before the master’s 1959 death. Jones eventually took a teaching position at the University of Arkansas in Fayetteville, which he held until his retirement in 1988. On the side, he built up a small but esteemed practice, taking some of his first commissions for the homes of fellow professors. His own residence, dating from 1956, gained him additional renown when it was featured in magazines that included House Beautiful and Progressive Architecture.

In all, Jones designed some 135 residences around the US, but he created nearly three dozen chapels as well. The most famous of these is the Thorncrown Chapel outside Eureka Springs, AR… Thorncrown, made of glass, stone, and wood, is just 24 feet wide, but 60 feet long, and became a major tourist destination for the region…

Though Jones was sometimes referred to as the creator of an “Ozark style” of architecture, he rejected the label, noting that many of his works were located far from the Ozark region. One of those commissions, however, was never completed: Jones had been hired by pizza magnate and Frank Lloyd Wright devotee Tom Monaghan to create a lavish residence in the Ann Arbor, MI, area…

Jones was feted with numerous professional honors over the course of his career, including more than 20 citations from the American Institute of Architects. He was presented with its top honor, the gold medal, in 1990, and a survey by AIA members the following year ranked him among top ten most influential living architects….

Another famous son of Arkansas, Bill Clinton, wrote about one of Jones’ homes in his 2004 autobiography My Life. Clinton had lived in Fayetteville in the 1970s while teaching at the University of Arkansas law school, and moved into a Jones home near the campus. Clinton called it a “perfect place to live, a beautiful little house.”