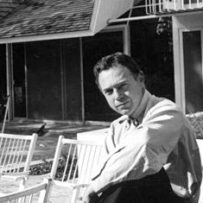 Harry Mohr Weese (1915-1998) was born in Evanston, Il, and studied architecture at the Massachusetts Institute of Technology and Yale University, receiving his bachelor’s degree from MIT in 1938. After graduation, Weese was awarded a fellowship in city planning at Cranbrook Academy in Bloomfield Hills, Michigan.

In 1939, Weese joined the Chicago office of Skidmore, Owings & Merrill. Shortly thereafter, he began his own architectural practice with Benjamin Baldwin, his brother-in-law and former Cranbrook classmate. In 1941, Weese joined the Navy as an engineering officer. Weese returned to SOM in 1946, but left to open his own office, Harry Weese Associates, in 1947.

Throughout his career, Weese was an outspoken advocate for architecture and planning that embraced the social, political, and economic realities of contemporary urban life. Among his most recognized designs are the Washington, DC, metro rail system; the United States embassy in Accra, Ghana; and the Arena Stage complex near Washington, DC. Weese also led the restoration of Louis Sullivan’s Auditorium building in Chicago. Weese was recognized through numerous awards and honors, and served on many blue-ribbon panels in the arenas of architecture, urban planning, and the fine arts. Weese was elected to the College of Fellows of the American Institute of Architects in 1961. He died in Manteno, Illinois, in 1998.