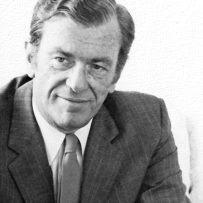 Hugh Stubbins Jr. (1912-2006) was an architect best known for the angular tower of the Citicorp Center in Manhattan, but also noted for his design of the Reagan Presidential Library in California and of the tallest building in Japan.

Although considered a Modernist, Mr. Stubbins was no strict adherent to that architectural style. His design for the Reagan Library in Simi Valley evokes the stucco and red-tile roofs of the mission style.

Hugh Asher Stubbins Jr. was born in Birmingham, AL. His father was a shoe salesman. Mr. Stubbins graduated from the Georgia Institute of Technology in 1932. A tall, trim man, he was a nationally ranked track star while in college, and an Olympic candidate until he was sidelined by a pulled hamstring. In 1935, he earned a master’s degree in architecture from the Harvard Graduate School of Design.

Mr. Stubbins and his firm, Hugh Stubbins and Associates, designed more than 800 buildings in eight countries, including many buildings on college campuses.

After World War II, Mr. Stubbins was commissioned by the United States government to design the Berlin Congress Hall in West Germany, a theater and exhibition space that some people refer to as the “pregnant oyster” because its roof slopes between two arches. Built in view of the East German border, it was seen as a symbol of American efforts to help West Germany recover.

Among Mr. Stubbins’s other favorite structures was the Federal Reserve Bank in downtown Boston, which opened in 1978. A 600-foot aluminum and glass tower, it is notable for its sunshades on each floor, giving the facade the appearance of a washboard, which are designed to protect the glass from glare and to alleviate the downward forces of wind at the street level.

In 1993, Mr. Stubbins completed his last building, the Landmark Tower in Yokohama, Japan. The 60-story building, which flares at its base, is the tallest building in Japan.