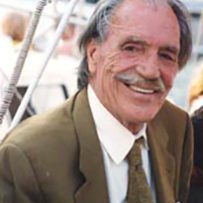 Born in Clydebank, Scotland, Ian McHarg began his career in landscape architecture apprenticing at the Glasgow firm Austin and McAslan, Ltd. After World War II, he immigrated to the U.S. to study at Harvard University, earning a B.L.A. in 1949, a M.L.A. in 1950, and a master’s degree in city planning in 1951. McHarg taught briefly at the University of Edinburgh before becoming an assistant professor at the University of Pennsylvania’s School of Fine Arts in 1954, where he established the Department of Landscape Architecture and M.L.A. program.

Through a combination of academic research and practice, McHarg laid the foundations for his ideas about using ecology as a basis for design and planning. In 1962, McHarg founded Wallace-McHarg Associates with planner-architect David Wallace. Three years later, the firm expanded to include partners William Roberts and Thomas Todd, becoming known as  Wallace Roberts & Todd.

With the firm, McHarg was able to implement his ideas on projects such as The Woodlands, Texas and numerous regional ecological studies and plans. In 1969, his theories were published in his seminal book Design with Nature, which helped redefine the design of new communities and regional planning all over the country, and influenced U.S. environmental policy. McHarg resigned from the firm in 1979, but continued to teach until 1986. He was awarded the National Medal of Art in 1990 and the Japan Prize in 2000.