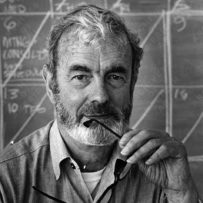 Joseph Esherick, was an internationally renowned architect and educator, and emeritus professor of architecture at University of California at Berkeley.

Born in Philadelphia in 1914, Joe Esherick graduated from the University of Pennsylvania with a degree in architecture in 1937. Shortly thereafter he moved to San Francisco, where he found part-time work with the structural engineer Walter Steilberg and later joined the firm of architect Gardner Dailey.

After a tour of duty in the Navy during World War II, Esherick established his own firm in San Francisco in 1946. His early work, mostly residential, betrays influences of both William Wurster and Gardner Dailey, who had pioneered and extended what later became known as the Bay Area Tradition of architecture. Another early and lasting influence on Esherick was his uncle, the sculptor Wharton Esherick, whose work he held up as an example to students and colleagues alike and from whom he learned to appreciate the genius of making art.

In 1972 he established a partnership with George Homsey, Peter Dodge, and Charles Davis, and the firm became Esherick, Homsey, Dodge, and Davis (EHDD).  Joe Esherick, a Fellow of the American Institute of Architects since 1965, was awarded the Institute’s Gold Medal for lifetime achievement in 1989. Notable among his many projects are: Wurster Hall, the home of the College of Environmental Design on the University of California, Berkeley campus, and designed in collaboration with Donald Olsen and Vernon DeMars, professors of architecture emeriti; The Cannery in San Francisco; the Adlai Stevenson College at the University of California, Santa Cruz; the Student Union at the California Polytechnic University in San Luis Obispo, California; and the Monterey Bay Aquarium.

Esherick was as active in education as he was in his practice. He joined the Department of Architecture faculty at Berkeley in 1952 from which he retired in 1985. His influence and impact on the department’s curriculum, values and spirit are felt to this day. Esherick was instrumental in bringing to Berkeley internationally known architectural theorists and educators, and in redefining architectural education in the early 1960s. The Berkeley curriculum did indeed become a model emulated by many schools across the nation. His lifelong concern for, and his sustained effort to improve the quality of architectural education, brought him the prestigious Topaz Award of the Association of Collegiate Schools of Architecture for excellence in architectural education. Upon his retirement in 1985, Professor Esherick received the Berkeley Citation, the most prestigious award given for notable achievement and service to the University.

Esherick’s most enduring contribution is to be found in his teaching of design studios that has affected several generations of architecture students. He scorned aesthetic theories of design, advocating that buildings should be designed for their specific purposes and inhabitants. He taught that no two design projects were ever alike, and that each project had to be thought through from the ground up, so to speak, in view of its unique conditions and circumstances. Solutions to the problems of form and function had to be reinvented for every case.

What he taught he also practiced. The works of the most renowned architects are recognized even by laypersons by their style, that is, by features that are repeated from one project to another. The work of Esherick defies this rule; it displays an incredible range of expressions. Who would ever guess that the architect of the Pelican Building on the Berkeley campus is also the architect of Wurster Hall? It has been said elsewhere, Joe Esherick, by “approaching each project with a clean mental slate… allowed himself tremendous creative breadth.” Friends and colleagues know that he applied this same approach to his hobbies—of which he had many—among them cooking and fly-fishing. He would plunge into these activities as if he had to reinvent them, and to some extent he did. His collection of self-made fishing flies was something to be seen, and the meals he cooked were memorable.

The late Horst Rittel, whom Esherick had lured to Berkeley from the Hochschule für Gestaltung in Ulm, Germany, wrote of the “awesome epistemic freedom in designing… nothing has to be or to remain as it is or as it appears to be; there are no limits to the conceivable.” Joe Esherick showed us all how to bear the burden and to make the best of this freedom with responsibility and dignity.