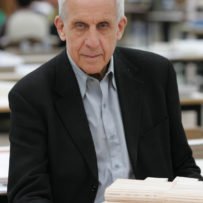 Kenneth Frampton studied at the Architectural Association in London from 1950 to 1956. He became an affiliate member of the Royal Institute of British Architects (RIBA) in 1957.

After two years’ service with the British Army, he spent one year in Israel, which he recalls as “a positive experience, architecturally speaking, in that it was a simpler country with a basic building technology.” Upon his return to London, Kenneth Frampton became an associate of Douglas Stephen & Partners, a small but dynamic architects’ firm in the City Centre and one of the most progressive practices in London at the time. The firm attracted talented young architects such as Panos Kowlermos and Peter Stonebridge.

For three years in the early sixties, Kenneth Frampton worked as a technical editor for the progressive and critical magazine “Architectural Design.”  Kenneth Frampton migrated to the United States in 1965. He worked for the School of Architecture at Princeton University until 1972. With the exception of three years at the Royal College of Art in London (1974 – 1977), he has been affiliated to Columbia University in New York since 1972. He was Chairman of the Division of Architecture from 1986 to 1989 and became director of the Ph.D. program History and Theory of Architecture in 1993.

Kenneth Frampton has gained an international reputation as a scholar, critic and writer on modern architecture. He taught as a visiting professor in schools of architecture worldwide. He has received a multitude of awards, including the American Institute of Architects (AIA) National Honours Award (1985), the Médaille d’Or of the Parisian Académie d’Architecture (1987), the Phi Beta Kappa Award (1987), the AIA New York Chapter Award of Merit (1988) and the Topaz Medal for excellence in architectural education from the Association of Collegiate Schools of Architecture (1990). The Stockholm Royal Institute of Technology awarded Kenneth Frampton an Honorary Doctorate of Technology (1991), and he received Honorary Doctorates in Environmental Studies from the University of Waterloo (1995) and from the California College of Arts and Crafts (1999). He became an associate of the American Institute of Architects and a fellow of the American Academy of Arts and Sciences in 1993. Kenneth Frampton was elected member of the Russian Academy of Constructional Science in 1995. Kenneth Frampton has written extensively, and contributed to numerous international journals. His books include “Modern Architecture: A Critical History” (1980), “Modern Architecture and the Critical Present” (1993), “American Masterworks” (1995), and “Studies in Tectonic Culture” (1995).