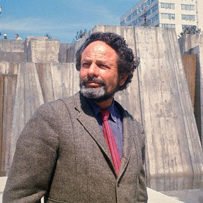 “Born in New York City and raised in Brooklyn, Halprin spent three years on a kibbutz in the British Mandate of Palestine (now Israel) before attending Cornell University and then the University of Wisconsin, where he earned an M.S. in horticulture. He received his B.L.A. from Harvard’s Graduate School of Design.

After apprenticing with Thomas Church, during which time Church built the famed Donnell garden in Sonoma, Halprin opened his own office in 1949. Amongst his innovations is the design process known as the RSVP Cycles. This method is marked by attention to human scale, user experience, and the social impact of design; these strengths were likely fueled by the work of his wife, dancer Anna Schuman Halprin. Simultaneously, he was able to attend to environmental concerns and to incorporate community participation in the design process. Prolific throughout his life, major projects include the FDR Memorial in Washington, DC; the Sea Ranch community in California; Freeway Park in Seattle; Heritage Park, Fort Worth, and Lovejoy Plaza in Portland, OR. Halprin garnered numerous awards including the Thomas Jefferson Medal in Architecture and the National Medal of Arts given by the President of the United States.”