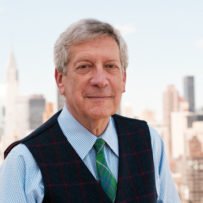 Malcolm Holzman’s buildings, described in a national publication as having a “brash beauty,” are acknowledged for their evocative nature, technical vision and singular character. He has completed commissions in 32 states, which represent some of this country’s most notable architecture and over the course of his professional career, has completed more than 150 building projects. His work shows a diversity of design solutions, reflecting a wide range of building types and the application of materials unique to the region of each project, winning numerous awards for this distinguished body of work.

His firm, Holzman Moss Bottino Architecture, is a national architectural and interior design firm specializing in the design of evocative cultural, civic, and academic buildings that welcome public use. The heart of our practice is a commitment to design excellence.