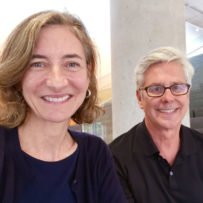 Michael Manfredi received his Master of Architecture at Cornell University where he studied with Colin Rowe. There he won the Paris Prize and the Eidlitz Fellowship. In addition to teaching at Cornell, where he is the Gensler Visiting Professor, he has taught design studios at University of Pennsylvania, and Princeton University. He was the founding chairman of the Van Alen Institute and is currently a board member of the Storefront for Art and Architecture.

WEISS/MANFREDI Architecture/Landscape/Urbanism is at the forefront of architectural design practices that are redefining the relationships between landscape, architecture, infrastructure, and art. The firm’s projects are noted for clarity of vision, bold and iconic forms, and material innovation. Named one of North America’s “Emerging Voices” by the Architectural League of New York, WEISS/MANFREDI’s distinct vision was recognized with the Award in Architecture from the American Academy of Arts and Letters. Additional honors include the Tau Sigma Delta Gold Medal and the New York AIA Gold Medal.