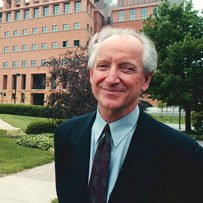 Michael Graves was one of the most prominent and prolific American architects of the latter 20th century. He designed more than 350 buildings around the world but was perhaps best known for his teakettle and pepper mill.

Mr. Graves was first associated with the New York Five, a group of architects who achieved cult-like stature by helping to redefine modernism in the 1970s. He went on to design projects like the headquarters of the health care company Humana in Louisville, Ky., and the Portland Building in Oregon, which exemplified postmodernism with their reliance on color and ornament and made him a celebrity.

Since founding his firm Michael Graves Architecture & Design in Princeton in 1964, Mr. Graves designed everything from office buildings, resorts and retail stores to hospitals, monuments and university buildings. His most prominent projects also included the Ministry of Health, Welfare and Sport in The Hague and an expansion of the Whitney Museum of American Art in New York, proposed in the mid-1980s, that was never realized.

Writing about the Humana building in 1985, Paul Goldberger of The New York Times called the tower, sheathed in pink granite with a solid glass shaft up the center, “a remarkable achievement — in every way Mr. Graves’s finest building, a tower that proves his ability not only to work at large scale, but to create interior and exterior details as well wrought as those of any architect now practicing.”

When he was awarded the American Institute of Architects’ gold medal in 2000, the institute’s Eugene C. Hopkins said Mr. Graves had “brought quality designed products within reach of everyone in the country.” He also received the National Medal of Arts from President Bill Clinton the previous year.

“For those of us who had the opportunity to work closely with Michael, we knew him as an extraordinary designer, teacher, mentor and friend,” his firm said in a statement. “For the countless students that he taught for more than 40 years, Michael was an inspiring professor who encouraged everyone to find their unique design voice.”

Born in Indianapolis, Indiana, Michael Graves had a childhood interest in drawing and painting that has stayed with him throughout his career in architecture. Michael Graves received his architectural training at the University of Cincinnati in a cooperative program that allowed him to work in the architectural office of Carl A. Strauss and Associates while completing his formal classroom education.

Upon receiving the degree of B.S. in Architecture in 1958, Michael Graves entered Harvard University’s Graduate School of Design and received a Master of Architecture degree the following year. After graduation, Michael Graves went to work for the designer and architect, George Nelson, where his long-standing interest in furniture design was encouraged. Michael Graves’s stay at Nelson’s office was short-lived however, because in 1960 he was the recipient of the Prix de Rome fellowship of the American Academy in Rome.