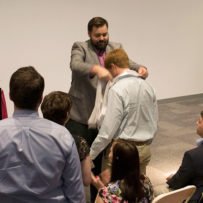 The Tau Sigma Delta First-Year Design Award is presented to the first-year design student who has exhibited excellence in design. This is a book award. Recipient: Matthew Lewis 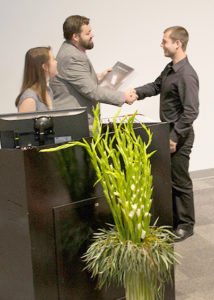 The Tau Sigma Delta Bronze Medal is presented by the third- and fourth-year student membership of the society to a fifth-year student who, in his/her thesis project, has expanded the students’ insight and awareness of architecture. Recipient: Jared Barnett

In fall 2000, Tau Sigma Delta established this book award in memory of a School of Architecture faculty member, Charles Calvo, and his contribution to the field of digital media in architecture. This award goes to a fourth-year student who, like Charles, has exemplified an incredible knowledge and skill in digital media and has continually educated other students in this field. A copy of the book given to the award winner is also given to the library in memory of Charles. Recipient: Ryan Mura

The Tau Sigma Delta Faculty Book Award is presented by the third- and fourth-year student members to the faculty member who has inspired them to excellence. Recipient: Erik Herman