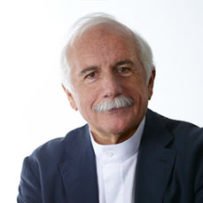 Moshe Safdie is an architect, urban planner, educator, theorist, and author. Embracing a comprehensive and humane design philosophy, Safdie is committed to architecture that supports and enhances a project’s program; that is informed by the geographic, social, and cultural elements that define a place: and that respond to human needs and aspirations. Safdie has completed a wide range of projects, such as cultural, educational, and civic institutions; neighborhoods and public parks; mixed-use urban centers and airports; and master plans for existing communities and entirely new cities around the world.

Major projects by Safdie Architects currently under construction or recently completed included Manila Alrov Center, a dynamic urban center near the Old City in Jerusalem; Marina Bay Sands, a mixed-use integrated resort in Singapore; Khalsa Heitage Memorial Complex, the national museum of the Sikh people in the Punjab, India; the United States Insitiute of Peace Headquarters on the Mall in Washington, D.C.; the National Campus for the Archeology of Israel in Jerusalem; Golden Dream Bay in Qinhuangdao, China; the Kauffman Center for the Performing Arts in Kansas City, Missouri; and the Crystal Brides Museum of American Art in Bentonvile, Arkansas.

In 1978, after teaching at Yale, Safdie relocated his residence and principle office to Boston, where he also served as the Director of the Urban Design Program at the Harvard University Graduate School of Design, and subsequently was the Ian Woodner Professor of Architecture and Urban Design.

In addition to numerous articles on the theory and practice of architecture, Safdie has written several books, most notably: Beyond Habitat (1970), For Everyone a Garden (1974),Form and Purpose (1982), Jerusalem: The Future of the Past (1989), and The City After theAutomobile (1997). Moshe Safdie II, a second monograph of his work, was published in 2009.

Based in Boston with offices in Toronto, Jerusalem, and Singapore, Safdie has been the recipient of numerous awards, honorary degrees, and civil honors, including the Companion Order of Canada and the Gold Medal of the Royal Architectural Institute of Canada.