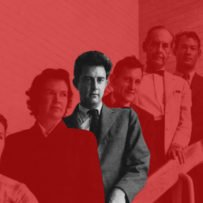 Norman Collings Fletcher (1917-2007) was a founding partner of the legendary design firm known as TAC (The Architects Collaborative) in Cambridge, MA.

Norman Fletcher was born in Providence, RI and graduated from the Yale University School of Architecture in 1940. In 1943 he joined Skidmore, Owings & Merrill, leaving them in 1944 to work with Saarinen, Swanson & Associates in Bloomfield Hills, MI. In 1945 he and his first wife, the former Jean Bodman Fletcher, joined forces with Walter Gropius and five other young architects to establish TAC. The prize money from their winning entries in the Smith College Dormitory Competition provided the first office funds.

Fletcher was convinced that the collaborative, or teamwork, approach to design as pioneered by TAC resulted in buildings which embraced experimental concepts, yet were socially responsive. The key ingredient was “attitude”, both toward the project at hand and the working relationship of the team. With each partner having an equal vote, the process resulted in consolidation and consensus.

During his 60 year practice, Fletcher directed a large number of projects including academic buildings for Harvard and Clark Universities, elementary and secondary schools throughout New England, medical facilities in Boston and Maine, corporate facilities for IBM, a major addition to the Sterling and Francine Clark Art Institute in Williamstown, MA (in association with Pietro Belluschi) as well as a complete new community for 60,000 people in Redwood City, CA. His favorite project, however, was for the profession he served – the new headquarters building for the AIA completed in Washington. D.C. in 1972. Fletcher was a Fellow of the American Institute of Architects as well as a former Vice President of the Boston Society of Architects.

With his wife Betty, Fletcher was a resident of Six Moon Hill in Lexington, MA, an experiment in communal living designed by TAC in 1948.