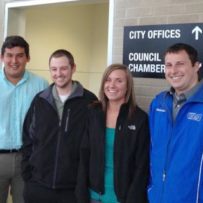 Six Lawrence Tech University students and their professor, Ralph Nunez, got some real-world experience in Ferndale, MI by creating designs for the area. The process of creating the plans included taking the students to the sites to take pictures, having the students meet with city officials, and ultimately arriving at Nunez’s landscape architecture business in Birmingham to start plans.  Several of the students are graduated in May. “They did this work without credit and after grades were handed in. This shows their dedication to the profession and represented LTU in a positive light,” Nunez said.

The first site is just outside Ferndale City Hall and the Ferndale Police Department, an area which features an historic clock tower, lots of green space and several unused parking spots.  Here, the students proposed creating a plaza with a stage and pavilion and using part of the clock tower as a water fountain attraction.

At the second locale, the students got a chance to work on designs for Schiffer Park, a small stretch of land. The proposal included a bioswale, large trees and utilization of the large wall by opening it to local artists as a canvas.

In both instances, the students wanted to best utilize the space and make it blend with the rest of the downtown area.