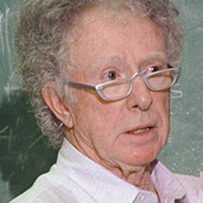 Pierre Koenig, whose sleek glass-and-steel houses became emblems of the progressive values of Postwar suburbia, died Sunday of leukemia at his home in Brentwood. He was 78.

As part of a group of architects that also included Charles and Ray Eames, Raphael Soriano and Craig Ellwood, Koenig was a key figure in a generation that helped make Los Angeles one of the great laboratories of 20th century architecture. Of these visionaries, Koenig seemed best able to capture the hopes and anxieties of California’s booming middle class.

His reputation in large part rests on the creation of two houses — Case Study House #21 and #22 — that were completed in 1959 and 1960 as part of an ambitious program that sought to introduce the values of Modernist architecture to suburbia. Clean abstract compositions, with a powerful relationship to their natural context, they exist as enduring emblems to Cold War America’s faith in technological progress and its transformative powers.

“Until the end of his life he remained an ardent believer in industrial materials and prefabricated systems — the idea that life could be improved through architecture,” said Elizabeth Smith, who curated the 1989 Case Study show, “Blueprints for Modern Living” at Los Angeles’ Museum of Contemporary Art.