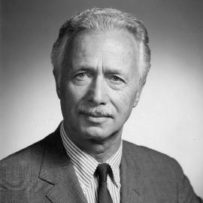 Pietro Belluschi was born August 18th 1899 in Ancona, Italy, and grew up and went to school in Rome. He graduated with a degree in Civil Engineering from the University of Rome in 1922. He was accepted to Cornell University through a fellowship grant, which is what brought him to the United States. Belluschi graduated from Cornell in 1924, after which he made his way to the west coast, finally settling in Portland, Oregon. He started his career in architecture at A.E. Doyle and Associates where he worked as a draftsman for the firm for a few years. His first major architectural commission was the Portland Art Museum… His subsequent works in Portland include the Commonwealth Building… and the Oregonian Building…  His career also included the design of many houses and places of worship in Oregon and across the US, as well as public arts buildings and educational facilities such as many buildings at Reed College throughout the mid-twentieth century.

In the early 1980’s Belluschi also became head consultant for Portland’s gleaming beauty the U.S. Bancorp Tower (also known as ‘Big Pink’).  Belluschi’s commission for the Portland Art Museum was a revolutionary endeavor because not only was he making a facility to house great works of art from masters throughout time, but was also creating a fully functional multipurpose facility, which was to serve the community of Portland as a whole. This design made Belluschi nationally recognized as a architectural force. The architectural style of Portland at the time largely remained in the 19th century mode of the Beaux-Arts/Renaissance Revival. His design for the Commonwealth Building was the first major high-rise to be built in Portland since the 1920s and the first major corporate tower to be built in the United States after World War II. Its distinctive sea-green tinted glass, aluminum cladding, and completely smooth exterior was unlike any other building in Portland at the time. It was the first building in the United States to be completely sealed and climate controlled due to its innovative (at the time) heating and cooling system.

Pietro Belluschi designed buildings that, because of his modernist architectural ideals, were built to be functional and lasting… Pietro Belluschi died on Valentines Day 1994 in Portland, Oregon a few months shy of his 95th birthday.