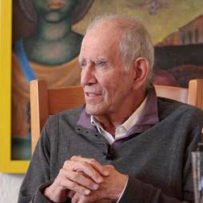 Ricardo Legorreta (1931 — 2011) was a Mexican architect who combined elements of Western modernism with traditional pre-Columbian design (thick masonry walls) and contemporary Latin components in more than 100 buildings that were known for their vibrant colours and geometric shapes.

After graduating from the National Autonomous University of Mexico, Legorreta remained in Mexico City and worked for the firm of José Villagrán García. In 1955 he became a partner, but he established his own Mexico City-based practice in 1960. His son, Victor, eventually became a partner in Legorreta + Legorreta.

After the death of Luis Barragán, Legorreta carried on his mentor’s tradition and influenced a generation of architects, especially those in the Southern Hemisphere, with designs that addressed and capitalized on the sunny environment. Notable among his work were Mexico City’s Camino Real Hotel, which featured pink walls; the 10-story purple bell tower in Pershing Square, Los Angeles; and the controversial San Antonio (Texas) Library, which critics claimed did not resemble a library with its bold red facade. Legorreta, however, viewed the criticism as a compliment, saying that the bold colour-splashed walls celebrated the joy of learning and the city’s bright future. He also served (1985–93) on the jury that awarded the Pritzker Architecture Prize, one of the field’s most coveted honours. In 2000 Legorreta won the American Institute of Architects Gold Medal, and in 2011 he was the recipient of the Praemium Imperiale for Architecture.