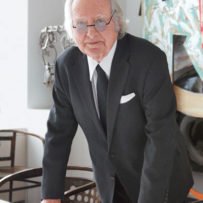 Richard Meier was born in Newark, New Jersey in 1934. Richard Meier graduated from Cornell University in 1957 then worked with a series of architects, including Skidmore, Owings, and Merrill and Marcel Breuer. Richard Meier established his own practice Richard Meier & Partners Architects in 1963.

His practice has included housing and private residences, museums, high-tech and medical facilities, commercial buildings and such major civic commissions as courthouses and city halls in the United States and Europe: Among his most well-known projects are the High Museum in Atlanta; the Frankfurt Museum for Decorative Arts In Germany; Canal+ Television Headquarters in Paris; the Hartford Seminary In Connecticut; the Atheneun in New Harmony, Indiana, and the Bronx Developmental Center in New York. All of these have received National Honor Awards from the American Institute of Architects (AIA).

Richard Meier has maintained a specific and unalterable attitude toward the design of buildings from the moment he first entered architecture. He has created a series of striking designs. Meier usually designs white Neo-Corbusian forms with enameled panels and glass. These structure usually play with the linear relationships of ramps and handrails. Meier manages to generate endless variations on his singular theme. As the main figure in the “New York Five,” which by the second half of the 1960’s, included some of the leaders of the Post-Modern movement – Peter Eisenman, John Hejduk, Michael Graves and Charles Gwathmey – Richard Meier ‘s white sculptural pieces created a new vocabulary of design for the 1980s. The three of the most significant concepts of Meier ‘s work are Light, Color and Place. His architecture shows how plain geometry, layered definition of spaces and effects of light and shade, allow him to create clear and comprehensible spaces.

The Atheneum (1975-1979) is a Tourist and Information Center situated on the banks of the Wabash River on the outskirts of the historic city of New Harmony. Setting the building diagonally to the river, gives the project a dynamic dimension as a departure point for the tour path. Here, “sense of place” is achieved through a series of visual, physical or psychological experiences which gradually establish a relationship to the past, represented by the historic city. Porcelain panels, clear glass, constant play of wall thickness, the breadth of vistas, the height of the columns and openings which interconnect with one another, all create dynamic facades that change according to the interior and exterior experience of the building.

Hartford Seminary of Theology (1978-1981) in Connecticut is a relatively small building which includes all the campus functions originally distributed in various buildings. A building of spirituality, the integral values and characteristics of space and light are radiated without any false pretensions. The filtered light, clean forms and expressionist textures successfully contribute to endow a rather sacred atmosphere without disturbing the virtue of openness.

His white is never white since it is subject to constant change through the forces of nature: the sky, the weather, the vegetation, the clouds and, of course – the light. This is clearly portrayed in The High Museum of Art in Atlanta (1980-1983) – a project that has become Richard Meier ‘s hallmark in many respects – a classical manifestation of his profound allegiance to whiteness. The monastic whiteness of the interior space maintains the minimalist presence of architecture in relationship to the exhibits, while the natural light causes a constantly changing interior.

Situated on a hill above Santa Monica, Los Angeles, the Paul Getty Center (1984-1997) is the most comprehensive work of Richard Meier, yet nonetheless a proof of the final decline of Post-Modernism. However, some would say that this project recalls the timeless beauty of sixteenth century Italian villas and gardens, perhaps that of Hadrian’s Villa at Tivoli. The tilting of the plan is based here on the relationship between the route of the freeway to San Diego and the topographic orientation of the site.

Richard Meier ‘s choice of materials in this complex is quite untypical. The play of volumes and proportions, manifested in the cascade of terraces and balconies, flow of ramps, galleries, arcades and staircases, weave the interplay of nature and architecture, yet reflects affinity to Classical architecture.

Thus, one may conclude that the Getty Center portrays three key points that characterize good architecture: interaction, consistency and unity. Architectural quality is experienced when “architecture can be used for a long span of time, when it ages beautifully, is original, comprehensible and simple to use”.