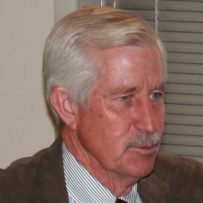 Roger Schluntz, FAIA, began his tenure at The University of New Mexico in June 1999 and served as the Dean of the School of Architecture and Planning for eleven years.  Among other accomplishments, during this time frame the School witnessed the establishment of its now fully accredited and acclaimed Master of Landscape Architecture degree program/faculty, as well as two interdisciplinary graduate certificate programs, Town Design and Historic Preservation & Regionalism.