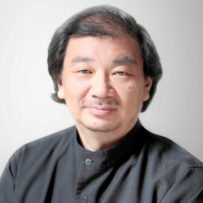 Shigeru Ban is known for his innovative work with paper, particularly recycled cardboard tubes used to quickly and efficiently house disaster victims.  In 2014, Ban was named the 37th recipient of the Pritzker Architecture Prize, the most prestigious prize in modern architecture. The Pritzker Jury cited Ban for his innovative use of material and his dedication to humanitarian efforts around the world, calling him “a committed teacher who is not only a role model for younger generation, but also an inspiration.”

For Ban, one of the most important themes in his work is the “invisible structure”. That is, he does not overly express his structural elements, but rather chooses to incorporate them into the design. Ban is not interested in the newest materials and techniques, but rather the expression of the concept behind his building.  He deliberately chooses materials to further this expression.

Ban was born in Tokyo, Japan. He studied at the Tokyo University of the Arts, and then at the Southern California Institute of Architecture. Later he went to Cooper Union’s School of Architecture, where he studied under John Hejduk and graduated in 1984.  From John Hejduk, Ban not only learned fundamental elements of architecture, but also gained an interest in “architectonic poetics” or the creation of “three-dimensional poetry.” Hejduk, the most experimentally minded of the New York Five, had a lasting influence on Ban, whose work reflects continuing explorations into basic geometric elements. Ban’s formal explorations with basic building materials helped to lead him into unique structural solutions.