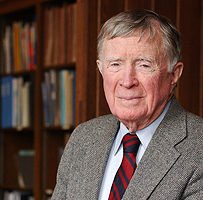 Yale architectural historian Vincent Scully was born to a modest family in New Haven, a city in which he remained his entire life. After graduating from high school at 15, he entered Yale University with a scholarship in 1936. At Yale, the lectures of Chauncey B. Tinker (1876-1963) caught his interest and he began graduate work in English. He quit after only one semester, citing a distain for the New Criticism that had gripped academic English departments. After failing to make the Army Flying Cadets, he joined the U. S. Marines in 1941 where he saw action in both the Mediterranean and Pacific theaters. After discharge in 1946, Scully returned to Yale and to art history. He was influenced by the French-school art historians at Yale, in contrast to the Germanic art historians at the other Ivy Leagues of Harvard and NYU, particularly Henri Focillon and Marcel Aubert. Scully was advised by George Heard Hamilton to write on the Hudson River School painters. Scully, however, had been deeply moved by the book Rhode Island Architecture by Henry-Russell Hitchcock. Hitchcock, who was teaching at Wesleyan University near Yale, agreed to be Scully’s Ph.D. advisor. Scully taught the large undergraduate survey of art history at Yale during the 1947-1948 year during the sabbatical of Carroll Meeks with fellow graduate student James Ackerman. He also began a life-long friendship with the architect Louis Kahn in 1947, who had come to teach at Yale. Hitchcock introduced Scully to Frank Lloyd Wright who designed a house for Scully (never built). Scully was appointed to the History of Art faculty upon his graduation from Yale in 1949. The first chapter of his dissertation appeared in the Art Bulletin as “Romantic Rationalism.” Scully won a Fulbright Fellowship in 1950 to study Gothic architecture in France, but deferred for a year, by which time his interests had changed to Greek architecture. Scully spent 1955 in Greece researching a book on the topic.

Throughout these years, he developed a strong appreciation for Wright and a growing distaste for the Bauhaus architects. Around this time he became interested in Jungian archetypes, applying the term to architecture. He was also one of the first to realize the “neoclassical” impulses in the work of Mies van der Rohe, relating them to Architectural Principles in the Age of Humanism by Rudolf Wittkower. He received tenure at Yale in 1956. By the late 1950s, Scully published portions of what would become a standard in the field of modern building, Modern Architecture: The Architecture of Democracy (1961). The same year he was appointed full professor. The following year, his research on Greek architecture was published as The Earth, the Temple and the Gods. The influence of Le Corbusier (specifically his Vers une architecture, 1923) was apparent. Scully’s disenchantment with International-style architecture was evident in his 1963 article criticizing the Gropius-designed Pan Am building in New York, “Death of a Street.” However, he found himself defending modern architecture in a print debate with Norman Mailer in the Architectural Forum titled “Mailer vs. Scully” (1964). Around this time he began championing the young architect Robert Venturi (b. 1925). Scully’s introduction to Venturi’s 1966 Complexity and Contradiction in Architecture is widely acknowledged to have solidified both Venturi’s and Scully’s careers.

Scully increasingly seemed to adopt much of Mailer’s arguments about the blandness and totalitarian implications of modern architecture. Scully’s American Architecture and Urbanism (1969) was essentially a rewrite of his Modern Architecture incorporating 1960s architecture and emphasizing the American Beaux-arts tradition. In the interim, The Shingle Style Today, or the Historian’s Revenge appeared. A major New Yorker profile was also written on Scully the same year. Scully remained teaching at Yale until he reached the mandatory 70-years in 1990. In retirement he taught at the University of Miami. The years of the 1990s brought his Architecture: The Natural and the Manmade (1991), a critique, in part, of modern architecture’s failure to harmonize with the fabric of cities.

Scully is a champion of the “other modernism” in architecture, the non-International school of architecture in the twentieth century. His books on Wright, Venturi and indigenous American architecture opened architectural theory from dry formalism to psychological and archetypal analysis. Scully’s Shingle Style (1974) credited Venturi, Charles Moore and their students as the true successors of Le Corbusier, opposing the 1972 book Five Architects, which attributed the lineage to Peter Eisenman and Michael Graves. Scully’s later work shows the influence of Harold Bloom, the conservative Yale literary historian, whose Freudian framework, as opposed to Scully’s earlier use of Jung, he may have adopted from Bloom’s Anxiety of Influence (1973).

The Wall Street Journal architecture critic and former architecture critic of The New York Times Ada Louise Huxtable, wrote that Scully and Cornell University professor Colin Rowe were the most influential architectural historians of their time. These two academicians inspired the two great schools of post-modern architecture. Rowe’s, known as “the Whites” because of their preoccupation with formal purity and the absence of color in their designs included Richard Meier, Eisenman, Charles Gwathmey and John Hejduk. Scully’s group, “the Grays,” rallied around populist notions and the writing of Venturi, included Charles Moore and Robert A. M. Stern. Many found fault with his brusque dismissal of modernist architecture. William Jordy criticized him, and by extension, Venturi, citing the “non-human realms of weather, minerals, plants, and . . . existences of all sorts” as more important than semiotic/Freudian impulses.