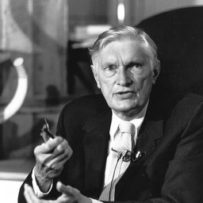 Walter Netsch was born in 1920 in Chicago and studied architecture at the Massachusetts Institute of Technology. Upon graduation in 1943 he enlisted in the U.S. Army.  Returning to civilian life in 1946, he took a job with L. Morgan Yost, a residential architect practicing in the suburbs of Chicago. In 1947 he joined the San Francisco office of Skidmore, Owings & Merrill. In 1951, he transferred to the Chicago office of SOM, where he became partner and developed his innovative architectural aesthetic, known as “field theory.” Netsch worked at SOM until retiring in 1979. Netsch’s career included such important commissions as the U. S. Air Force Academy, Colorado Springs, Colorado; the University of Illinois, Chicago; The Art Institute of Chicago’s East Wing; and the Regenstein Libraries at Northwestern University and the University of Chicago.

After retiring from SOM, he maintained a consulting practice in Chicago. Netsch was elected to the College of Fellows of the American Institute of Architects in 1967.