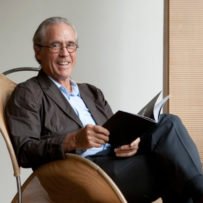 William Pedersen is the founding Design Partner of Kohn Pedersen Fox Associates (KPF), which he started with A. Eugene Kohn and Sheldon Fox in 1976. Fourteen years later, they became the youngest firm to receive the National AIA Firm Award for design excellence. Since the firm’s inception, it has been Bill’s intention to lead only a segment of the firm’s designs, thereby allowing for the parallel development of other design partners and for his continued focus on each project he directs. This aspiration has led to stimulating competition within the KPF design community and has allowed the firm to expand in capacity and dimension while still maintaining design quality, particularly necessary since the advent of our global practice.

Of particular concern to Bill has been the development of what he calls the “fundamental building block of the modern city:” the high-rise commercial office building. Throughout his career, he has systematically sought ways for buildings of this seemingly-mundane type to gesture and connect to other participants so that each does not stand mutely in isolation from its neighbors, but rather joins in an active architectural conversation with them. He regards his accomplishments in this area of architectural pursuit as his most substantial accomplishments. Presently, he is at work on Hudson Yards in New York where his philosophical intentions for commercial buildings are being given the ultimate test.

During his career with KPF, Bill has received seven National Design Awards for work he has directed. Among them are a wide variety of building types: 333 Wacker Drive in Chicago; the Procter and Gamble Headquarters in Cincinnati; the DG Bank in Frankfurt, Germany; the World Bank in Washington, D.C.: the Gannett Headquarters in McLean, Virginia; the Baruch College in Manhattan, New York; and One Jackson Square in Manhattan, New York. In addition to numerous state and local AIA awards, he received recognition from the Council for Tall buildings and Urban Habitat (CTBUH) for the Shanghai World Financial Center as the “Best Tall Building in the World” in 2009. In addition to his architectural work, Bill has designed a series of award-winning lighting fixtures for Ivalo and holds ten design patents for furniture. His most recent “Loop de Loop” series will be coming out this year.

Personal honors which Bill has received include the Rome Prize in Architecture in 1965, the Arnold W. Brunner Memorial Prize from the American Academy and the National Institute of Arts and Letters, the University of Minnesota’s Alumni Achievement Award, the Gold Medal from the national architectural fraternity, Tau Sigma, the Lynn S. Beedle Lifetime Achievement Award from the CTBUH and the Medal of Honor from the AIA of New York. He was also recently elected as a member of the National Academy and was awarded the 2013 International Award by The Society of American Registered Architects (SARA).